How can a mobile app support small businesses in India?

It’s not easy for small businesses to go digital. This market has always relied heavily on cash and paper receipts, and despite a multitude of available solutions to complete and record transactions digitally, adoption levels remain low.

This is because these solutions often fail to fully account for customer needs and behavior in their design. Many institutions believe that if they build digital products, customers will want to use them. In reality, the likelihood of digital usage at the merchant-level is driven by a range of factors, including  convenience, the merchants’ digital readiness, and the aspirations and pain points they experience in everyday practices.

When Aye Finance, a microfinance lending institution based in Delhi, decided to venture into the world of digital financial services for micro, small, and medium enterprises (MSMEs), they were determined to address customer pain points and provide added benefits that would drive usage. The Mastercard Center for Inclusive Growth helped fund Accion’s advisory team’s work with Aye to develop digital solutions for its clients.

Aye lends to small-scale manufacturing, trading, and service businesses that cannot easily access capital from mainstream financial institutions in India. The average loan to these businesses is about US$2,100. The company wanted to allow its customers to build a digital transaction history, which would give clients more control and oversight over their businesses and more convenient and frictionless access to Aye’s financial services. Aye adopted three core principles in their approach to driving adoption: a customer-centric methodology, a simple solution, and a dedicated team responsible for execution.

Rather than entering the project with a predefined idea of how they were going to deliver value to the target market, the organization conducted one-on-one interviews with customers to better understand the pain points that they face in running and growing their businesses. The team asked merchants about their business cycles, recordkeeping habits, existing relationships with financial service providers, and day-to-day transactions. Through understanding their customers’ everyday lives better, Aye was able to identify a value proposition they believed had the potential to drive mass adoption. The results pointed to five prioritized areas where Aye could deliver client value. These were focused on the need for a business management tool that could provide:

“As we delved deeper into the challenges faced by micro businesses, we realized that we needed to go beyond providing an affordable line of credit. We developed the mAye app to further equip micro entrepreneurs to deal with all facets of their business ranging from daily bookkeeping to reapplying for a new loan from Aye. 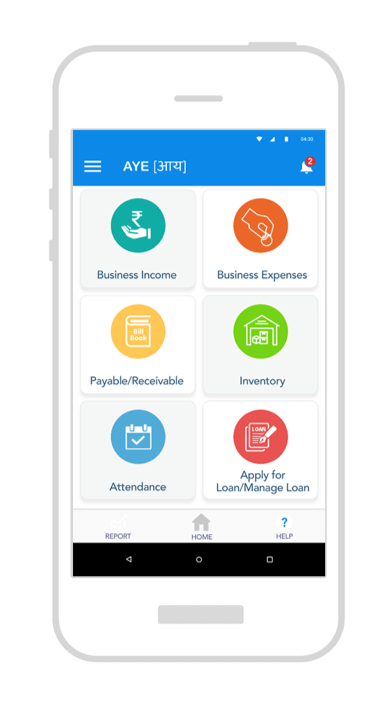 Aye discovered that the overwhelming majority of their target market owned and actively used smartphone applications for a range of different purposes, so they decided to create a mobile app. The business management app, named mAye, addresses all five of the merchant needs uncovered in user research. Microentrepreneurs would be able to record and consolidate their business records, gain instant access to the latest balance on their loan, plan and track inventory purchases and staff attendance, and set up on-the-go reminders for making and receiving payments — all within the app.

Rather than overwhelm users with the full range of app capabilities during the pilot, Aye targeted individual segments with the specific functionality that research indicated would be most useful. For example, the need for a more convenient means of consolidating and recording income and expenses was a primary pain point for customers in the manufacturing industry. As such, marketing materials, education, and outreach to manufacturers centered on the app’s ability to record transactions. This curated approach for each customer group enabled people to quickly derive value from the app. End users had a simple way to access the functionality that was most likely to drive their individual adoption of the tool.

A dedicated team for execution

In the process of developing the app, Aye recognized that they would need to make some changes to their internal capacity to get the tool operational. Piloting and scaling new digitally enabled initiatives required dedicated management and resourcing.

To focus internal efforts on the app, Aye set up a specific team within its strategy unit to focus exclusively on driving adoption of the mobile app. The new team was responsible for familiarizing and coaching Aye’s customers as they used the tool.

By championing these core principles of customer centricity, simplicity, and a dedicated team, Aye was able to drive a significant response from its customers. Over a three month period, the app was downloaded more than 1000 times, despite the pilot operating across only 4 branches. Over 30 percent of these downloads were from individuals that are not customers of Aye — demonstrating the value of the tool for customer acquisition.

End users had a simple way to access the functionality that was most likely to drive their individual adoption of the tool.

Although the size of the pilot is not significant enough to draw definitive conclusions on the uptake of Aye’s mobile app at scale, these figures are promising. Aye is now looking to consolidate its learnings from the exercise so that it can prepare to scale the initiative from its testing environment to its wider branch network.

Beyond acting as a differentiator from competition and allowing the institution to offer value on top of their loan operations, the long-term plan for the application is to eventually use the data it collects to provide customers with faster underwriting on loans and to strengthen small businesses’ financial health by informing better business decisions.

Perhaps the most valuable learning from the pilot came from the experience Aye gained in testing and proving the core principles in their approach. A customer-centric approach, keeping the solution simple, and dedicating a team to execution lay a strong foundation for launching new digital financial services tools.

How to empower small businesses to go digital and rebuild